My little man has been sick ever since New Year's eve. High temps (up to 103.1) just plain ole miserable. On top of it all, he has been cutting his two top teeth at the exact same time. He's super touchy. Just wants mommy to hold him all the time. Poor little guy! The breaking point came after he'd had the fever 2 nights and 2 days. I was ready to do something for the little guy! After nights in the bathtub, trying to get high temps down, and a peaking of 103.1 (may have been higher before, but this sure felt hot enough to me!) I called the Dr. He calmly said not to worry. That it was probably viral and that my baby would break out in a rash within 24 hrs. of the fever breaking. I was like... "What?!" Well, sure enough. The fever broke. And within 24 hrs. Nathan had a red rash from the top of his head, to his abdomen and all over his back and neck. Roseola. I went through this before with Hannah.
I looked up the incubation period of Roseola. It's 9-10 days. The weird thing is that when Hannah had it, I knew where I had been! (Walmart! think mouth on shopping cart) This time around, i also knew where I had been! Target! There again, think mouth on shopping cart. Argh! I have always had him in his carrier thus far when shopping. But this particular evening, we had just run in to get some formula that was on sale. I held him, but after a while had gotten tired of him reaching to get in the cart with hannah and put him in next to her. He immediately began sucking on the cart wherever he could. So, there you have it. Mystery solved! There's always a culprit for illness. Always. Thankfully, this time around, Hannah has already had it and you typically don't get it over again. Hopefully. And, it is passed its contagious stage now that the rash has made its appearance. Within 4 days, it should have dissapeared. Meanwhile, my boy is as cranky and moody as all get out!
Here is a picture, so you can kind of get an idea of what the rash looks like. Then maybe you won't freak out when it happens to you! hehe! The picture is hard to portray, but this redness covers his entire body, excluding the extremeties. Here he is pouting (yet again) and reaching for the camera. 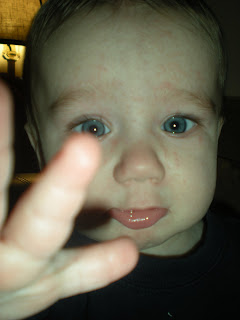