You read that title right! I had a day off yesterday! Wow. What pure bliss! I went shopping! Minus the kids! It was such a breeze to run in and out of stores. No strollers to drag around, no squirming kidlets to fasten in to their seatbelts. No whining, no crying. Just me, myself and I. It's been a long time since i've had a day solo. It's almost strange. Almost.... lonely! *gasp* I remember how much I really do love my kiddo's and how sweet they are. And then, when I heard little Hannah's voice across the telephone..... ahh, my heart just melted. Especially when she said-"I love you mommy! Come home! See you soon! bye!"
I meandered through the Salvation Army thrift store and found some fun deals on clothes. It was 50% off all their clothing. The place was swarming! Then I went in Target and found some fun art supplies for Hannah! (next post, read all about it) I checked out several places, one of them being Old Navy. I've never been in that store much. I found out that I really liked it! I got some adorable pieces of clothing! All for decent prices! I'll have to post pictures of some of the outfits some time...
So, about 2:00 I was completely famished and missing everyone and unsure as to what to do next. I called Mike and asked him if he and the kids wanted to go to the beach. He "him hawwed" around and then decided to go. (He sounded whipped! lol!) I caught a bite to eat at Panera (a tasty bowl of black bean soup and a yummy panini sandwhich) and went to pick them up.
We had a great afternoon relaxing together at the beach. It was so much fun! And a much needed break. Last night before drifting off to sleep, Mike told me that he had a really great day. Said he had enjoyed spending time with the kids and playing with them. I thought that was just great! 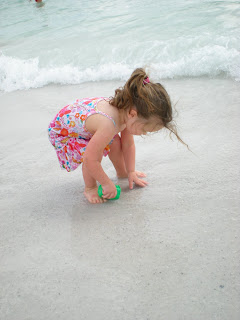 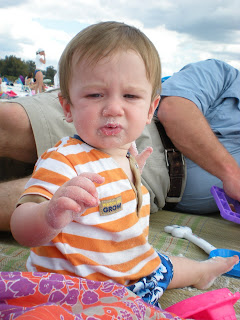