Make Bread while the Sun shines!

Have you ever made Bread outside? Yesterday I felt inspired. We really needed some fresh bread, but I hate the awful mess it makes indoors. Especially with little ones in tow, wanting to get their hands in on the process! (=flour everywhere) So, since the day was nice, we took it all outdoors. I have a picnic table on the back porch, so I brought the large mixing bowl, freshly ground flour, oil, salt, sweetner, yeast , you know-the essentials. It was so nice to be outside! The birds were singing, the sun was shining and it wasn't too hot out. Letting the bread raise outside was terrific! The warmth made it almost like on oven set on warm and the dough rose quite quickly. 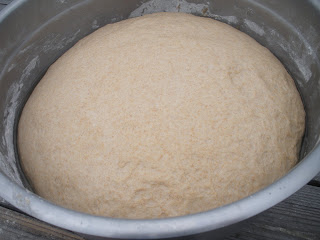 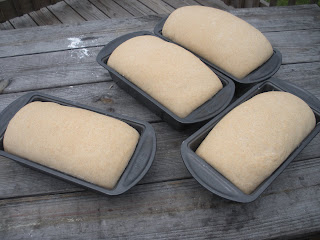 Transferred it over to bread pans for the second rise. Here it is shown after it has all risen. Of course, both the dough bowl and the bread pans were covered with a towel while rising. : 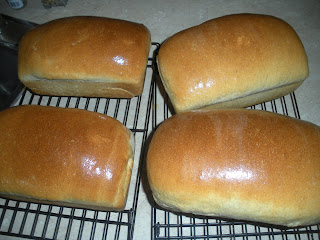 ) And here's the finished product! Baked inside, unfortunately. ;) This recipe is my favorite, hands down. It's a recipe that I got from my days working in the kitchen at youth camp. One of the past camp cooks had left the recipe and it was one that we'd make 22 loaves at a time to bake. I used to eat this bread every single morning with a bowl of camp granola and fruit. Couldn't get tired of it. Soooo super yummy!

So, what about you? Ever make anything outside? It's kinda fun!