The Struggle (For Women)

My Sweet, bright eyed baby. The baby who lights up my world with smiles. Rebecca Joy. My third born. How I love her! 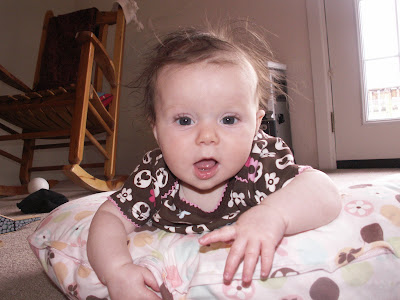 The story is told of a mother. A mother who strove to give her babies the very best. A mother who desired to breastfeed her babies until their first birthday. This is the story of a mother who was unable to fulfill that dream. I entitle this story, "The Struggle."
Mama's first baby was born. A healthy baby girl, 7 lbs. 10 ozs. Lovingly named, Hannah Rose. Mama figured breastfeeding was the most natural thing in the world. Baby took to it like a champ. She plumped out into the chubbiest little sweetie and seemed to do just fine until around 4 months of age where she began not sleeping through the night and being oh so very fussy. It being the mother's first child, she just figured her baby was growing and maybe working on some teeth. There wasn't a thought in her mind that perhaps there was anything amiss in the feeding department. At Hannah's 6 month Doctor checkup, it was discovered that instead of gaining weight, Hannah had lost 2 pounds. The mother was appauled. The mother was completely dismayed! And so were the Doctor's. "Put her on formula right away was their plea." And the mother was worried. However, after a few weeks on formula, the baby had chubbed back up, began sleeping through the night once again and was generally a much happier and content little girl.
The mother began her studies. Studies to find ways to produce more milk and therefore have a better supply for when baby number two came her way. She didn't have long to wait, for just 18 months later, Nathan Scott came into the world. A cuddly little boy, just loving to be loved. Since baby number one, the mama had read about Mother's Milk Tea and began to drink it with a vengeance. However, right around 4 months of age, little Nathan began having troubles not getting enough to eat. Once again, the mother began supplementing. Her dreams being dashed once more. For you see, when the little babe caught glimpse of the lovely bottle and how nicely it appealed and filled his tiny tummy... it was just too wonderful to pass up and the mama's milk supply just didn't do it justice. The little man refused to drink from his mama any more.
The poor mother was so sad. A rush of emotion's struggled to express themselves and she pushed them away and just tried to know that at least her sweet boy was getting fed and feeling content.
But the mother did not give up her search. She read and she read. And she found some answers that perhaps would take care of the trouble that seemed to be hers. Herbs and teas and capsules... ahh yes. Perhaps this all would work; when number three came her way.
Two years and three months later, Rebecca Joy came to join the family. The mother was armed and ready with homemade teas made by the gallons, capsules to swallow and water to down. Pumps and freezer bags held ready by her side. At first, things seemed to go quite well. Except for baby's fussiness. It was discovered that she couldn't tolerate her mother's dairy intake, so all that precious milk that the mother had stored in her freezer for later, well, it couldn't realy be consumed, for fear of upset tummies. So the mother tried to pump some more, and found that there just wasn't much left after feeding her sweet little babe. And then came the 4 month check up where it was seen, that baby wasn't gaining weight as she should and she really needed to be supplemented. So mama would feed and then offer bottle. Baby would take anywhere from 2-4 ounces and mama knew with a sinking feeling, all efforts were failing yet again. The mother searched for more answers and found one that seemingly helped a bit, but not enough. Baby wanted to eat. And she wanted to eat NOW. So, the mother offered both sources of nourishment and tried to increase what she had to offer. And she dealt with the flood of emotions surging within. Just desiring to nourish her baby with the very best and having such a very hard time. Why was this struggle hers? Some say that we just don't know why these things happen, but all things have a purpose. Some say-you didn't try hard enough. Other's say, it must be a problem with you. But the mother knows, deep inside, that she's tried, oh so very hard to do her very best. The mother knows that she's struggled and cried and plead with the Lord. And so the mother gives up the struggle. She contents herself once more with seeing a happy and fed baby. Holding her close and feeding her the bottle, Holding her close to the bosom and feeling her warmth and seeing her sleepy eyes drift off to sleep. She's treasuring the moments with her baby love, knowing it won't be long til she big and grown, no longer depending on her mother for any kind of nourishment. She's trusting, that whether she understands it or not; God has a plan. The struggle, is HIS.
Posted by Sarah at 3:06 PM

Email ThisBlogThis!Share to TwitterShare to FacebookShare to Pinterest
Labels: Rebecca