A few weeks ago, our big boy golden, Cowboy, suddenly died. Could have been from the excessive heat. Could have been an aneurysm. At any rate, he was fine in the afternoon, and gone in the evening. So we are really don't know what happened. But we were all pretty sad. It was getting time to change our our male dog, just due to the fact that he was getting to be a bit unpredictable as he aged, and with small children, you just don't want to take any risks. However, we were not expecting something like THIS to happen to him! The children helped Mike to dig his grave with the backhoe and really experienced first handedly the seriousness of death. For a while, the processed it over and over in their minds, talking it out with me. Such a sad thing to happen!

So, since our male dog had died, we knew we were going to have to replace him. So we began casually looking. Yesterday, Mike went and got this adorable puppy whom the kid's fell in love with. They named him Benji. 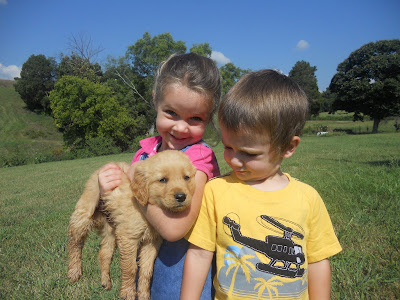 Nathan wants to hold him ALL the time. They are having such fun bonding with him!
(and hosing him down. If you notice, he's a bit wet in the pictures!) 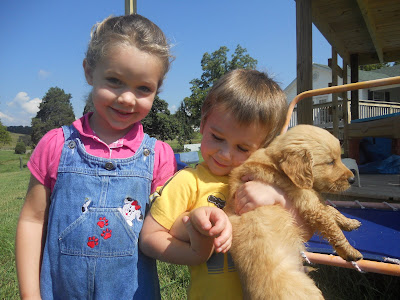 Look at that cute puppy face! :) 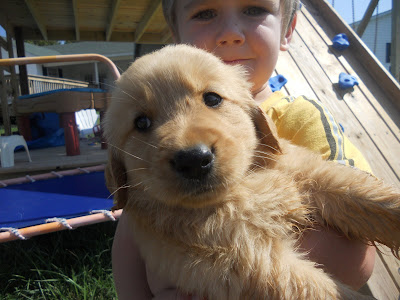 We are looking forward to training him well and hopefully be able to have him as a good pet for the children too. They sure love him now! Benji likes to chase the kid's around and they in turn think it's just an absolute blast!